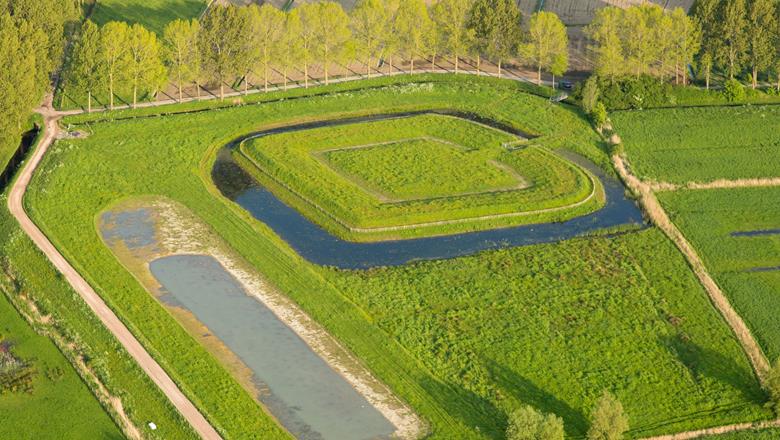 This redoubt or small defence was built during the War of the Spanish Succession in the 2nd half of 1703. The Burnt Fort was built to the north of the Romboutswerve dyke in the place where there was a sag pipe or syphon under the dyke. This allowed to flood the area to the south of the dyke and tot the north of the Verse Vaart. The redoubt was of the classical type consisting of a moat, an outer wall and a defence wall. The traces of the burnt clay on the ground indicate that the wooden watchtower inside the fort was destroyed by fire.

What still remains of the fort is a square meadow with a side of 88 metres. The dyke of the Schipdonk canal offers the best view of this fort.

In the relics of the former rampart moat we find interesting marsh vegetation with amongst others common cat-tail, branched bur-reed, flowering rush and nodding bur-marigold. In the spring this biotope welcomes numerous amphibians.

The common toad as well as the brown and green frog are very common at this time of year. They go in search of shallow, stagnant water in which to lay their eggs. The small smooth newt also finds a suitable environment between the water plants.

The nature reserve is freely accessible.