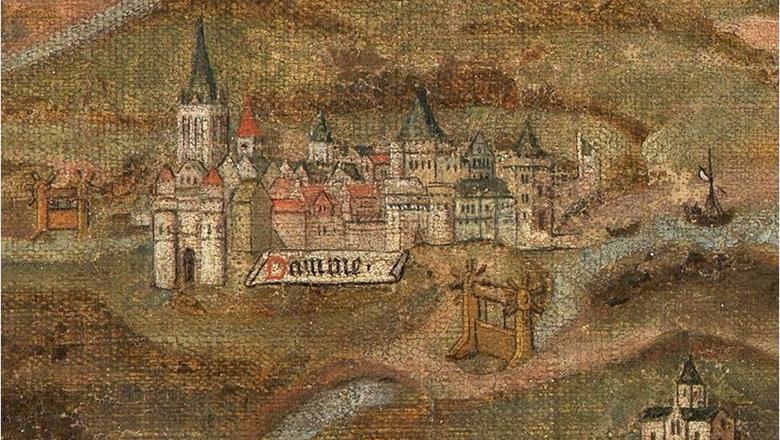 In 1134 a storm surge ravaged the North Sea coast and tore out a creek, later to be known as the Zwin, as far inland as the neighbourhood of Bruges, which sought an outlet to the sea. They immediately built a transverse dyke at the extremity. A fishing village grew by this 'dam'. Philip of Alsace, Count of Flanders, realized the maritime advantages of this little port and in 1180 granted city rights to Damme. Meanwhile Bruges had dug a canal to Damme, and the town quickly turned into a dynamic transhipment port.

More than 300 kind of goods were imported via Damme. We mention with pride that Damme had the staple rights on wine from Bordeaux and on herring, which even came from Sweden.

After the French king Philippe-Auguste had burned Damme to the ground in 1213, feverish building began: work commenced on Our Lady's Church in 1225, the new halls in about 1241, and by 1249 the St. John's Hospital is mentioned.

Sadly, the period of growth did not last long for, by the end of the thirteenth century, the Zwin channel began to silt up. In spite of this crisis the people of Damme built, between 1464 and 1468, a new Town Hall. Charles the Bold married Margaret of York in Damme in 1468.

Between 1578 and 1584 the uprising of the Protestants raged widly round the Dutch border. Our Lady's Church, the Holy Cross chapel and St. Catherine's-outside-Damme suffered plunder and destruction. During the Eighty Year's War Damme lay in the front line and the medieval fortifications were demolished to make way for the seven-star-shaped ramparts of the Vauban type. In 1725 part of the nave and the transept of the church and its steeple were demolished.

In 1811 Napoleon employed Spanish prisoners-of-war to dig a canal between Bruges and the Scheldt. The bedding, however, did not spare the Damme Cornmarket, and all the fine embassies met the same fate. Damme was thus halved in size. In 1815 Hoeke was reached and under the Dutch regime the canal was extended as far as Sluis.

Between 1842 and 1843 the Leopold Canal was dug to draw off the water from the Scheldt polders. In 1846 work began on the diversion canal of the Leie, better known as the Schipdonk canal. Thus the appearance of the region was completely transformed in half a century. 150 years later this is seen as a unique polder landscape.

Whilst the area was spared during the First World War, Damme and its surroundings were less fortunate in the Second. The Siphons were dynamited in May 1940 and at the end of the war Oostkerke was flooded. On 13 and 14 September 1944 the terrible Battle of the Mill in Moerkerke was fought. Oostkerke church was blown up on 22 October 1944...

When peace was restored Damme turned into a quiet agricultural village with a high reputation for gastronomy. Since 1977 Damme's name has not only stood for the charming little village beside the romantic Damme canal, but it forms, together with Hoeke, Lapscheure, Moerkerke, Oostkerke, Den Hoorn, Sijsele and Vivenkapelle, one magnificent town in the unique delta between Bruges and the sea. Moreover, in 1997, it was promotoed to Book-town, just as Hay-on-Wye.