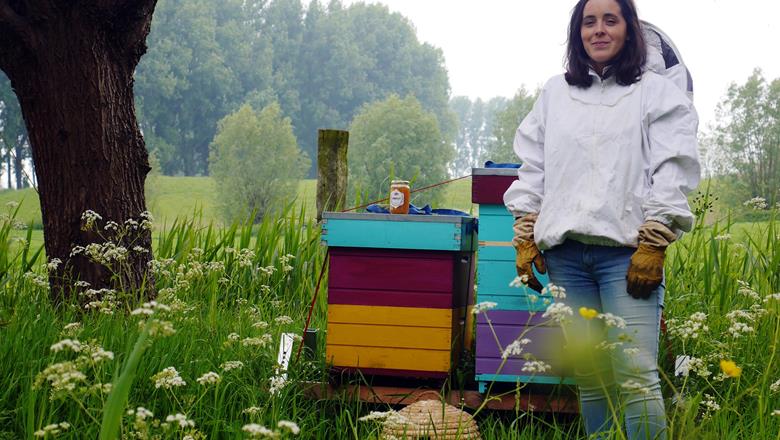 Seven years ago in France, Romy and Nicolas struck on the idea of becoming beekeepers. Since then, they have managed to acquire ten bee colonies, spread over their own meadow in Moerkerke, but also in the bee garden in Sijsele and at the ‘Slekkeput’ in Damme. This young beekeeper couple will share their bee story with much enthusiasm with anyone who cares to buy a jar of honey off them. In the process, they will try to convince everyone of the impact of certain choices, however small.

Their honey is named after the 18th-century naturalist and explorer Alexander von Humboldt. The fact that 'hum' refers to the bee-buzzing is a nice bonus. Humboldt Honey is still just a hobby, but Romy and Nicolas hope to expand their Humboldt Farm by extending their range of products, but also by giving workshops to school children and adults.

Pre-heat the oven to 200°C. Wash the rhubarb and cut into 5-10 cm pieces. Place the pieces next to each other in a baking dish. Pour the juice of the squeezed orange, with the zest of the skin, over the rhubarb. Then mix in honey carefully. Place the baking dish in the oven for about 25 minutes until the rhubarb is al dente. Place the rhubarb pieces on a plate and pour some juice from the oven dish over them. Finish with a scoop of vanilla ice cream and a mint leaf.