Those who would like to know more about the antics and pranks of Tyll Owlglass, meet his international clones and understand the cultural-historical context in which this figure emerged, hurry to the Tyll Owlglass Museum now.

Charles De Coster wrote his masterpiece in 1867 with ‘La légende d’Ulenspiegel’ [the legend of Owlglass]. De Coster based his story on folk tales that were written down in 1500 already. The first prints with Ulenspiegel from Damme appeared around 1650. In Damme, the mischievous geus Tijl Uilenspiegel [Tyll Owlglass] and his friends Lamme Goedzak and Nele have been honoured for a long time. From the 17th century people even thought that Uilenspiegel was buried in the Church of Our Lady in what was actually the tomb of Jacob van Maerlant. 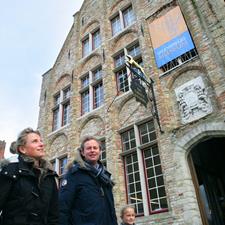